Becoming a pharmacy technician is a popular option for those looking to enter a rewarding field without spending a ton of time and money on schooling.

Many medical professionals go to school anywhere between four and eight years to become experts in their field. However, pharmacy technician certification can be earned in a mere matter of months, typically between three months and a year. 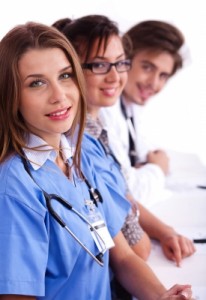 For anyone looking to break into this career, schooling is the first and most important step. While on-the-job training was traditionally considered adequate for technicians, increasing scrutiny and calls for regulations are prompting more employers to require education and certification.

Today, schools offer programs on traditional campuses and online. It’s actually one of the only medical training programs that has the option of studying completely online. The flexibility of programs is another aspect that motivates people to pursue their pharmacy technician certification.

The exam is broken up into three major sections.

The PTCB offers a series of practice exams that will help prepare candidates for the certification exam. The practice exams will help candidates get a feel for the structure and format of the test and can even predict how likely someone is to pass the exam.

Pharmacy technicians are employed by pharmacies, hospitals, drug stores and other businesses. Technicians work both full and part time and spend most of a shift on their feet. Most employers today will only hire technicians who have received both schooling and certification through the PTCB.

With the proper certifications in hand, job opportunities will be plenty. According to the Bureau of Labor Statistics, employment for technicians is expected to grow 32 percent through 2020.

With such excellent opportunities, it’s easy to get on the fast-track toward a rewarding career. The median income for techs is around $28,000. However, with new regulations and a move toward certification – salaries could be on the rise in the foreseeable future, especially if certification with the PTCB becomes required by federal law, which some see as a possibility in the future.

There’s never been a better time to enter a profession with such ample job opportunities and earning potential. with the proper schooling and certification, the options are looking better than ever.